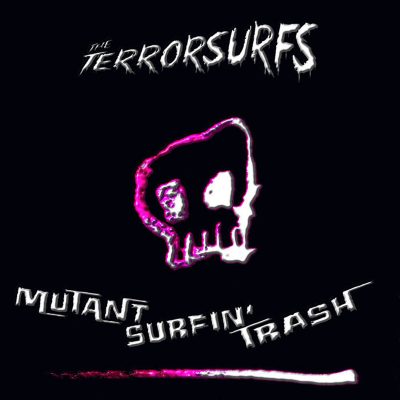 The tenacious surfing garage rockers The Terrorsurfs are back with their new album Mutant Surfin’ Trash. Like their other releases, fans can easily expect some consistency in The Terrorsurfs’ style. It’s the grittiness of The Cramps twisting through the vivid wild sounds of The Trashmen. Think of it as a soundtrack for a Quentin Tarantino film, like a contemporary Kill Bill Vol 1 or Pulp Fiction, but with the desperation of Robert Rodriguez’s Once Upon a Time in Mexico.

Check out the full review of Mutant Surfin’ Trash published by SLUG Magazine!! 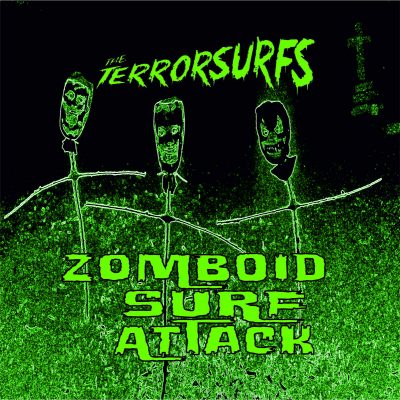 The Terrorsurfs are the bastard offspring of surfs meets mutant rock n’ roll meets Sergio Leone spaghetti westerns, and they are as diabolical as that sounds. Theirs is music of possession, grabbing ahold of the unwary listener’s soul. This record will cast one under its spell.

As expected, The Terrorsurfs are stunning in their subtle instrumental assault on the senses. This is not much of a surprise, given the sneak peek into their powers of mutant persuasion via their 7” single released last year. The same kind of ferocity is found on this album, with some interesting additions. First, let’s say that the vibrancy of mutant surf is a constant source of enjoyment, even though it is a sound well explored. Its edgy nature is influenced by the crashing waves and long–standing rebellion only found in the surf. This is a style evolved from the greats like Dick Dale or even The Ventures. It is also something found in noises made by The Phantom Surfers and the psychobilly outfit Demoni. 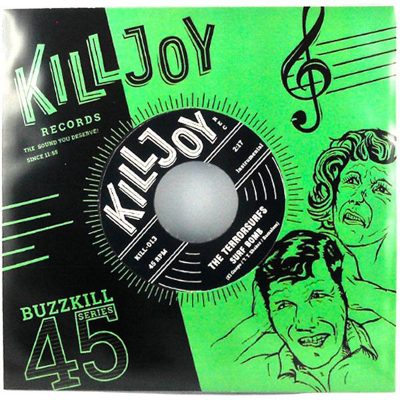 I have a complex appreciation for the raw sounds of surfy garage-punk. By its very nature, it’s music that invokes hostile feelings of rebellion and angst. This is the result of a unique, salt-water style that is made up of primitive guitar riffs that define its rambunctious sound. It’s a familiar style of rebellion best suited for the wilds of the ocean waves. One could say that it all started with The Ventures or Dick Dale or even The Safaris. Years after these pioneers laid down this foundation came the birth of punk. This new philosophy reenergized this style with a dangerous attitude and subsequently, we get bands like Guantanamo Baywatch, The Phantom Surfers, or in this case, The Terrorsurfs.