At long last The Jackets have released their fourth album, Queen of the Pill. It’s a brilliant record that shows off the logical evolution of the sound that made Way Out and Shadow of Sound great.

Queen of the Pill boasts the raw snarl of the fuzzed out garage-punk found in Way Out and combines it with Shadow of Sound’s refined freakbeat influenced garage-psych style. However, what sets Queen of the Pill apart from the previous records is The Stooges-esque proto-punk attitude twisting with elements of King Khan & The BBQ Show’s style, which should come as no surprise since King Khan was involved in this record’s production.

Check Out the full album review published by Heatwave Magazine!!

Faz Waltz’s new album Double Decker is a worthy successor to their already rich catalogue of music. Since the release of Callin’ Loud in 2016 it’d almost be a surprise if Faz Waltz could top songs like ‘Good Time Is Callin’ Loud.’

However, with Double Decker, fans will be pleased to find an album filled with bangers, catchy anthems and ballads meant to invigorate the soul. Much like with their previous material this album captures the boot-stomping essence of Jook, with Slade meets a Revolver era Beatles-like rock n’ roll sound.

Sinful and nihilistic, The Cavemen’s Nuke Earth does nothing short of leave its listener as a drooling, reverbed drenched mess. Fans of The Cavemen will be comforted to know that their legendary barbarity remains intact. This record is a 25 minute thrill ride that invokes the untamed nature of Guitar Wolf and the brutality of the Dwarves. Much like their other records, The Cavemen do not disappoint by embodying an unapologetic assault on all that is vanilla and bland in the music world.

Within the grooves of this record are sounds from LA’s Black Mambas and London’s Suicide Generation. It’s a record representing a match made by the shredding-sirens of hell-destined angels. 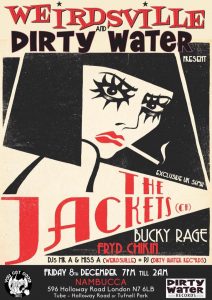 Dirty Water Club & Weirdsville Present: ​The Jackets, The Bucky Rage and Fryd Chikin with DJ MR A & Miss A and DJ PJ @Nambucca 08/12/2017

This was a weekend like no other. Weirdsville/Dirty Water presented Londoners with the superb talents of Fryd Chikin, The Bucky Rage and The Jackets. For those uninitiated, travelling to Nambucca for this evening’s entertainment required the sheer determination to brave a night of temperatures dropping to bone chilling levels. Luckily, for the devout rock n’ rollers that lurk in the shadows, this club is constantly home to music that warms the soul… and drinks to dull the senses.

Helen De Joie’s fourth club all-dayer/night has a knack for featuring some tremendous talent. Usually it’s a night dedicated to all things 60’s psychedelic and hedonistic, but tonight Factory De Joie’s theme is punk rock in the vein of an Andy Warhol vibe, meeting the infamous CBGB’s – just not in New York City, but rather at the ever so hip Victoria in Dalston, East London. Thanks to the dim lighting and scenes from Punk Revolution projected onto the backdrop of the stage, the atmosphere for Factory De Joie was set. This night drew on strictly vinyl DJ’s serenading the audience through spinning classic and deep cuts of punk records, with punk and glam bands wreaking havoc. With the inspiring expressiveness of burlesque dancers providing the intermissions more saucy entertainment.

Check out the full show review, published by Heatwave Magazine!!

The Darts (US) are a real treat. They have an impressive lineup with Nicole Laurenne of The Love Me Nots, Motobunny and Zero Zero, Rikki Styxx of The Dollyrots, Christina Nunez of The Love Me Nots and Casual Encounters and Michelle Balderrama of Brainspoon.

With their powers combined they boast an impressive sound that blends 1960s girl-group garage rock with Icona Pop sensibilities. Think a fuzz infused style that invokes The Models version of ‘Bend Me, Shape Me’ with The Pleasure Seekers’ attitude and Motobunny’s infectious energy.

Piss Test live up to strong legacy of 40 years of devastatingly raw punk rock. It’s fast, hard and takes no prisoners. It contains all the familiar themes of defiance, anger and disaffection with society, which makes for a solid punk record. This self-titled LP boasts a style that reminds me of the bastard offspring of DI and DOA. It even comes across as a distant cousin of contemporaries, The Night Birds.

The Franklys are an all-girl garage group that blends a volatile mix of Hives inspired garage rock with indie-like psychedelic notions from early 1970s metal. I’ll admit to waiting eagerly for the release of their debut album Are You Listening. It has all of the hits to date.

Unlike The Franklys previous string of releases Are You Listening boasts quite the polished sound. This record doesn’t have the gritty production found within the grooves of the Puppet 7-inch. However it still manifests The Franklys’ high-energy style, extenuated by their signature barbed wire riffs and heavy drum beats.

Eat Hot Lead was originally recorded and released in 1980, through Puke Spit & Guts’ own label, Important Records. Decades later, the idea for reissuing this legendary record was taken on by Jello Biafra’s Alternative Tentacles, before Black Gladiator and Slovenly Recordings got ahold of it – a project ten years in the making!

Earlier this week I published my album review of @