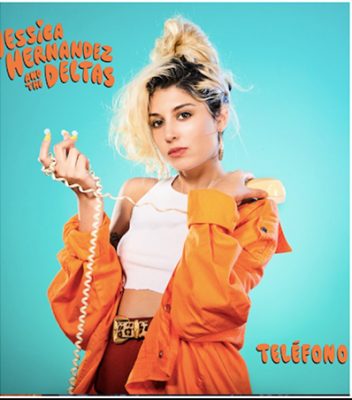 It should be a thing that any band boasting the name “Deltas” in it will be good. Catching this act in 2014, I was sold on Jessica Hernandez’s gothic take on soul. This band is moving, gripping and addictively dark. The new album, Telephone/Teléfono, takes the familiar style of Secret Evil, but in a noticeably-pop driven direction. Telephone/Teléfono shows off Hernandez’s ability to be personal and provocative. In this record, Hernandez goes a step further by diving straight into her Cuban and Mexican-American heritage. To represent this, Hernandez recorded two versions of her sophomore album—one in English and the other in Spanish.

Both the English and Spanish recordings display a unique and fresh take on the listening experience. It’s pop for everyone, and this record represents the potential of music’s inclusive vitality. Plus, like Jessica Hernandez & The Deltas’ other material, Telephone/Teléfono still has an eclectic range of styles. It’s psychedelia surf with Latin roots, plus a definitive, punky edge—not to mention plenty of the renowned Detroit nitty-gritty….