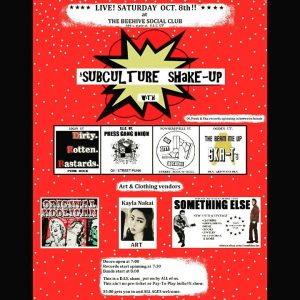 On October 8, The Ogden based rebel rocker outfit Jail City Rockers will be hosting the Subculture Shake Up! at The Beehive Social Club. The show comes in response to an ever increasing amount of sub-culturally minded groups playing predominately 21 plus venues. Because of this, it is felt that younger audiences are deprived of experiencing the unique energy inspired by punk and other kind of D.I.Y influenced performances. The solution, is The Subculture Shake Up! which boasts an impressive lineup of some of Utah’s renowned punk, oi and ska bands. The bill comprises of Press Gang Union, The Beam Me Up Ska-T’s, Jail City Rockers and the anticipated debut of Logan’s Dirty Rotten Bastards. The gig also includes a DJ spinning  punk, ska and Oi! classics and vendors selling art and clothing. Speaking more on the Subculture Shake Up! Jail City Rockers agreed to spill the beans on what can be expected.

NixBeat: What about subcultures do you find are important?
Jail City Rockers: We really believe it gives people their own sense of identity, and for the outcasts and for the people that felt like they never fit in, they could find a place to belong.

NixBeat: When chatting before you mentioned that well known bands are playing more 21 + instead of all ages venues. Why do you think that is? How do groups playing only 21+ venues affect the scene?
Jail City Rockers: Money! It’s a good way for them to make money. We understand the appeal, anybody who is in a band, would like to make a living at their craft, but the shows coming through lately have been 21 plus, excluding the younger generation. Because in part there are very few all age venues here or some of these bands want a certain guarantee and they know they can make it in a bar. Therefore it affects the scene, because the kids can’t see these bands. They feel excluded from the scene. They are stuck in their rooms, deprived of the experience of live music. We are not against playing bar shows, but we are against exclusively playing bar shows.

NixBeat: You’ve assembled quite the all-star cast of groups. How did you get Dirty Rotten Bastards, Press Gang Union and Beam Me Up SKA T’s to join you on this venture?
Jail City Rockers: We simply asked them. We really wanted to highlight the different aspects of the subculture. We all love different genres of it ranging for oi! to punk to ska, and everything else in-between, and all the bands we asked were really backing the idea.

NixBeat: I’ve noticed that you’ll have someone spinning records as well as vendors for this show. What can you tell me about all of that?
Jail City Rockers: Yes we have Gabe from Jail City spinning records, from his personal collection. Being part of the subculture for 25 plus years, he is bringing the music that got him into everything— late 60s ska, two tone era ska, oi! from America and England (pre 95), and also 70s and early 80s punk. We also have Kayla Nakai from Get Lost Art. She has an intricate, vivid, and abstract style that won’t disappoint. We also have David Overstreet bringing his amazing stencil art! His style and iconic portraits are unique to the scene. We are excited to have both of them apart of this, and last, but not least we have Something Else Subculture Clothing and Vintage finds. They are going to be bringing an array of clothing, shoes, books, music and various brands that they sell— Ben Sherman, Dr. Martin, Penguin, vintage and much more!

NixBeat: What do you hope that this show will accomplish?
Jail City Rockers: Most of all, Fun! [But], also to inspire everyone to create something new and to keep things alive and moving. With a lot of the punk and ska shows being 21 [and] up, we wanted to give something back to the kids

NixBeat: Do you see other groups or organizations trying similar ways to include more people into the scene? And If so, who and how?
Jail City Rockers: Yes, Mr. Konrad Keele runs two all ages venues. He has kept the scene alive and given music to the younger generation. We have seen other groups do events, as well [as] including vendors and music, but rarely for all ages.

NixBeat: I hear Jail City Rockers has an EP on the way. What’s going on there?
Jail City Rockers: We have been in the studio, and have almost wrapped up our new EP. We hope to have it out by the end of this year. We also have split with Press Gang Union, we hope to have recorded and out later this fall! With a solid line up now–with Kasey Avenue—we feel like we can get these things accomplished.

NixBeat: What’s next for Jail City Rockers?
Jail City Rockers: Now with the solid lineup a west coast tour is in the works. We are tightening up our older songs and writing and learning new ones. Another Subculture Shake Up! is in the works as well. We really want to make it a regular event involving more bands and vendors!

For more on The Subculture Shake Up! visit the event page!

For more on Jail City Rockers check out their Facebook and their bandcamp.